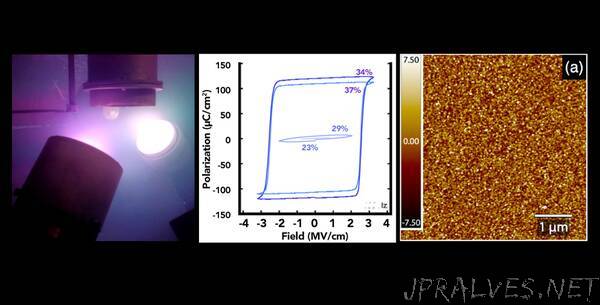 A new family of materials that could result in improved digital information storage and uses less energy may be possible thanks to a team of Penn State researchers who demonstrated ferroelectricity in magnesium-substituted zinc oxide.

Ferroelectric materials are spontaneous electricly polarized bcause negative and positive charges in the material tend toward opposite sides and with the application of an external electric field reorient. They can be affected by physical force, which is why they are useful for push-button ignitors such as those found in gas grills. They can also be used for data storage and memory, because they remain in one polarized state without additional power and so are low-energy digital storage solutions.

“We’ve identified a new family of materials from which we can make tiny capacitors and we can set their polarization orientation so that their surface charge is either plus or minus,” said Jon-Paul Maria, professor of materials science and engineering, and co-author of the paper published in the Journal of Applied Physics. “That setting is nonvolatile, meaning we can set the capacitor to plus, and it stays plus, we can set it to minus, it stays minus. And then we can come back and identify how we set that capacitor, at say an hour ago.”

This ability could enable a form of digital storage that does not use as much electricity as other forms.

“This type of storage requires no additional energy,” Maria said. “And that’s important because many of the computer memories that we use today require additional electricity to sustain the information, and we use a substantial amount of the American energy budget on information.”

The new materials are made with magnesium-substituted zinc oxide thin films. The film was grown via sputter deposition, a process where argon ions are accelerated towards the target materials, impacting it with a high enough energy to break atoms free from the target that contains magnesium and zinc. The freed magnesium and zinc atoms travel in a vapor phase until they react with oxygen and collect on a platinum-coated aluminum oxide substrate and form the thin films.

Researchers have studied magnesium-substituted zinc oxide as a method of increasing zinc oxide’s band gap, a key material characteristic that is important for creating semiconductors. However, the material was never explored for ferroelectricity. Nonetheless, the researchers believed that the material could be made ferroelectric, based on an idea of “ferroelectrics everywhere” posited by Maria and Susan Trolier-McKinstry, Evan Pugh University Professor, Steward S. Flaschen Professor of Ceramic Science and Engineering, and co-author on the paper.

“Generally speaking, ferroelectricity often occurs in minerals that are complicated from a structure and chemistry point of view,” Maria said. “And our team proposed the idea about two years ago, that there are other simpler crystals in which this useful phenomenon could be identified, as there were some clues that made us propose this possibility. To say ‘ferroelectrics everywhere’ is a bit of a play on words, but it captures the idea that there were materials around us that were giving us hints, and we were ignoring those hints for a long time.”

Part of the process Trolier-McKinstry and Maria’s group followed is developing a figure of merit, a quantity used in sciences such as analytical chemistry and materials research that characterizes the performance of a device, material or method relative to alternatives.

“As we look at any application for material, we often devise a figure of merit that says what combination of materials properties we would need for any given application to make it as effective as possible,” said Trolier-McKinstry. “And this new family of ferroelectrics, it gives us whole new possibilities for those figures of merit. It’s very appealing for applications that historically we haven’t had great materials sets for, so this kind of new materials development tends to spark new applications.”

An added benefit of the magnesium-substituted zinc oxide thin films is how they can be deposited at much lower temperatures than other ferroelectric materials.

“The overwhelming majority of electronic materials are prepared with the assistance of high temperatures, and high temperatures means anywhere from 300 to 1000 degrees Celsius (572 to 1835 degrees Fahrenheit),” said Maria. “Whenever you make materials at elevated temperatures, it comes with a lot of difficulties. They tend to be engineering difficulties, but nonetheless they make everything more challenging. Consider that every capacitor needs two electrical contacts — if I prepare my ferroelectric layer at high temperatures on at least one of these contacts, at some point an unwanted chemical reaction will occur. So, when you can make things at low temperatures, you can integrate them much more easily.”

The next step for the new materials is making them into capacitators that are approximately 10 nanometers thick and 20 to 30 nanometers in lateral dimensions, which is a difficult engineering challenge. The researchers need to create a way to control the growth of the materials so there are no issues such as imperfections in the materials. Trolier-McKinstry said that solving these issues will be key to whether these materials are usable in new technologies — cell phones with chips that use much less energy, allowing sustained operation for a week or more.

“When developing new materials, you have to find out how they fail, and then understand how to mitigate those failure mechanisms,” Trolier-McKinstry said. “And for every single application, you need to decide what are the essential properties, and how will they evolve over time. And until you’ve made some measurements on that, you don’t know what the big challenges are going to be, and the reliability and manufacturability are huge in terms of whether this material ends up in your cell phone in five years.”

The U.S. Department of Energy and the National Science Foundation supported this research.”