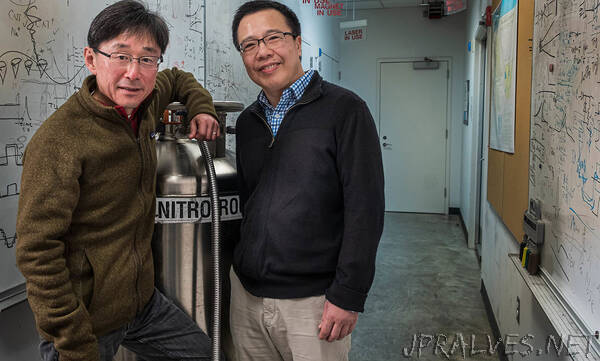 The preliminary results suggest something approaching the same physics is behind these two essential but previously distinct quantum technologies. The temptation, then, is to imagine a future in which a sort of grand unified theory of entanglement and superconductivity might be developed, where breakthroughs in one field could be translated into the other.

The research centers around a thin film of a metal (composed of the elements ytterbium, rhodium, and silicon) fabricated by researchers at the Vienna University of Technology. A team at Rice, then, analyzed its peculiar properties.

They observed the film in a state that both exhibited so-called “quantum critical” behavior and a widespread level of quantum entanglement among billions of its electrons.

“Usually with qubits, you build one; you build two; if you get to ten, that’s a large number,” said Qimiao Si, professor of physics at Rice and director of the Rice Center for Quantum Materials. “There’s a tantalizing promise that collectively, there’s so many electrons that are quantum mechanically entangled, and they could potentially be a resource for quantum engineering.”

The film’s quantum critical state, which is separate and distinct from its observed quantum entanglement, comes courtesy of the film’s composition. Si said the team relied on previous research that’s established this film has a net-zero magnetic field—but only because its electrons are aligned electron-by-electron, one against the other. This “anti-ferromagnetic” behavior is a hallmark of its quantum critical state.

“As a field, we’d like to understand the nature of quantum criticality,” Si said. The present research, he added, helps in that quest.

Si and colleagues cooled their metal film down near absolute zero to observe its response to a range of terahertz radiation beams. Although less than 0.1 percent of any given terahertz beam transmitted through the film, the researchers found that if they integrated their observations over many hours, they could piece together a weak signal.

Tell any quantum computer scientist that entanglement can be generated not in the dozens or hundreds of particles but rather in the millions or billions, and they might be inclined to take a gander.

On the other hand, tell any superconductivity researcher that the same phenomenon that’s potentially at the root of their Holy Grail quest (quantum criticality) happens in the apparent presence of quantum entanglement, and they might want to know more, too.

“It took a long time to demonstrate that this kind of quantum criticality involves quantum entanglement in an essential way,” Si said. “This is (also) fundamental research that has the potential to provide the design principles for high-temperature superconductivity.”

The group’s research was published in a recent issue of the journal Science.”