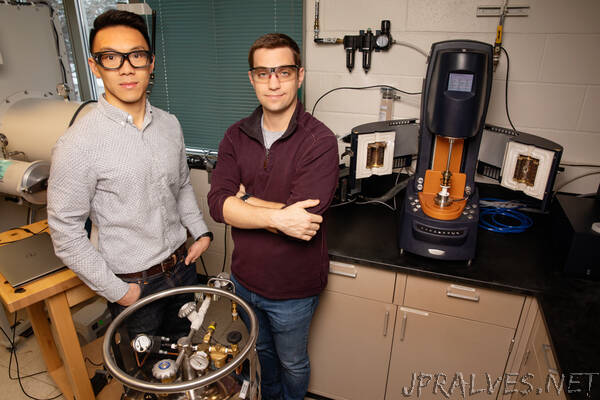 “Lithium-ion batteries are notorious for developing internal electrical shorts that can ignite a battery’s liquid electrolytes, leading to explosions and fires. Engineers at the University of Illinois have developed a solid polymer-based electrolyte that can self-heal after damage – and the material can also be recycled without the use of harsh chemicals or high temperatures.

The new study, which could help manufacturers produce recyclable, self-healing commercial batteries, is published in the Journal of the American Chemical Society.

As lithium-ion batteries go through multiple cycles of charge and discharge, they develop tiny, branchlike structures of solid lithium called dendrites, the researchers said. These structures reduce battery life, cause hotspots and electrical shorts, and sometimes grow large enough to puncture the internal parts of the battery, causing explosive chemical reactions between the electrodes and electrolyte liquids.

There has been a push by chemists and engineers to replace the liquid electrolytes in lithium-ion batteries with solid materials such as ceramics or polymers, the researchers said. However, many of these materials are rigid and brittle resulting in poor electrolyte-to-electrode contact and reduced conductivity.

“Solid ion-conducting polymers are one option for developing nonliquid electrolytes,” said Brian Jing, a materials science and engineering graduate student and study co-author. “But the high-temperature conditions inside a battery can melt most polymers, again resulting in dendrites and failure.”

Past studies have produced solid electrolytes by using a network of polymer strands that are cross-linked to form a rubbery lithium conductor. This method delays the growth of dendrites; however, these materials are complex and cannot be recovered or healed after damage, Jing said.

To address this issue, the researchers developed a network polymer electrolyte in which the cross-link point can undergo exchange reactions and swap polymer strands. In contrast to linear polymers, these networks actually get stiffer upon heating, which can potentially minimize the dendrite problem, the researchers said. Additionally, they can be easily broken down and resolidified into a networked structure after damage, making them recyclable, and they restore conductivity after being damaged because they are self-healing.

“This new network polymer also shows the remarkable property that both conductivity and stiffness increase with heating, which is not seen in conventional polymer electrolytes,” Jing said.

“Most polymers require strong acids and high temperatures to break down,” said materials science and engineering professor and lead author Christopher Evans. “Our material dissolves in water at room temperature, making it a very energy-efficient and environmentally friendly process.”

The team probed the conductivity of the new material and found its potential as an effective battery electrolyte to be promising, the researchers said, but acknowledge that more work is required before it could be used in batteries that are comparable to what is in use today.

“I think this work presents an interesting platform for others to test,” Evans said. “We used a very specific chemistry and a very specific dynamic bond in our polymer, but we think this platform can be reconfigured to be used with many other chemistries to tweak the conductivity and mechanical properties.”

Evans and Jing also are affiliated with the Beckman Institute for Advanced Science and Technology at the U. of I.

The Energy Biosciences Institute, through the EBI-Shell Program, supported this study.”