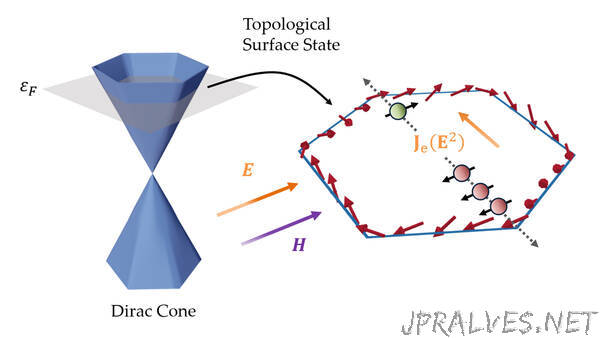 Because of topological insulators’ unique electronic properties and their potential use in spintronic devices and even conceivably as transistors for quantum computers, scientists at the U.S. Department of Energy’s (DOE) Argonne National Laboratory are interested in investigating the special relationship between two properties of the conducting surface electrons in these materials.

“It really gives us a look under the hood,” ― Olle Heinonen, Argonne materials scientist

In topological insulators, the spin and momentum of each surface electrons are so closely tied that, in scientific parlance, they are locked to one another. ​“Spin-momentum locking is like having a basketball that must rotate in a specific direction depending on its trajectory down the court,” said Argonne materials scientist Olle Heinonen. ​“Because an electron also carries a magnetic moment, you can use spin-momentum locking to manipulate magnetic systems very efficiently.”

The electronic structure of topological insulators, including the specifics of spin-momentum locking, may be reflected in the transport behavior of electrons in the materials. To explore the novel behavior of electrons in the topological materials, Argonne scientists worked with scientists at the National University of Singapore, who performed a transport experiment that provided a new perspective of the topologically protected electronic structure.

Heinonen and former Argonne postdoctoral researcher Shulei Zhang described how in the transport experiment a magnetic field applied in the plane of a thin film of a topological insulator can create a voltage in the direction perpendicular to the applied electric current — a phenomenon called a nonlinear planar Hall effect. By varying the direction and intensity of the magnetic field, the Argonne researchers and their colleagues could ascertain from the resulting resistance information as to how the electrons are distributed in terms of their momenta and spin.

“If you know how magnetic fields applied in different directions would affect the nonlinear Hall current measured, you can use our theoretical model to map out how the electrons’ momenta and spins are distributed,” Zhang said. ​“Then, because of the way we can see more precisely how the electromagnetic fields interact with the surface conduction electrons, we can get much more detailed information of the surface electronic structure of topological insulators.”

The tie between the nonlinear planar Hall effect and the topological surface states with spin-momentum locking is, according to Heinonen, a ​“macroscopic-microscopic relationship.”

“It really gives us a look under the hood,” he said.

A paper based on the study, ​“Nonlinear planar hall effect,” appeared in the July 1 online edition of Physical Review Letters.

Researchers from the University of Missouri also collaborated on the work.

Funding for the study came from DOE’s Office of Science (Office of Basic Energy Sciences).”