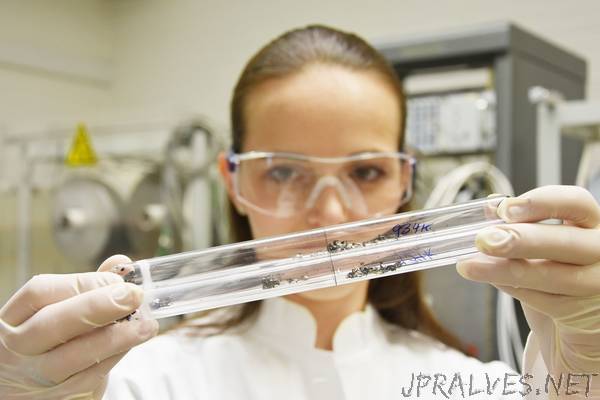 The properties of materials are determined by their atomic structure. If atoms and electrons change their positions, then the characteristics of a material also change. The complex processes that occur during these changes are being investigated by a working group at Kiel University (CAU), using a unique material: tantalum disulphide. The Kiel-based group specialises in the production of this layered crystal, and research teams around the world use their samples as the basis for experiments on dynamic processes in materials. Together with the Universities of Göttingen, Duisburg-Essen and Aarhus, three studies based on tantalum disulphide from Kiel have appeared recently, revealing previously-unknown phenomena in the movement of electrons and atoms. In the long term, the results could, for example, indicate how these movements could be controlled, thereby enabling properties of materials to be changed in a targeted manner. They appeared in the journals “Nature Physics”, “Physical Review Letters” and “Physical Review B”.

A Drosophila of materials physics
It is both a unique and simple material, with which scientists want to discover more about the diverse behaviour of electrons and atoms. “Tantalum disulphide is its own nano-cosmos, incredibly rich in quantum physical phenomena,” enthused Kai Roßnagel, professor of solid state research with synchrotron radiation at the CAU and lead scientist at the Deutsches Elektronen-Synchrotron (DESY). “It offers us endless investigation possibilities.” If it is chilled or exposed to flashes of light, for example, its atoms and electrons rearrange themselves. The material thus switches from conductor to insulator, or vice versa.

Using the special layered crystal, Roßnagel and his colleagues want to better understand how such special material properties arise. Amongst other things, they want to find out how and also how fast properties can be changed. For such investigations, the simple layer-like structure of tantalum disulphide is very useful. It enables quantum physical phenomena to be interpreted more easily. “Tantalum disulphide is therefore excellently suited as a reference material for solid state physics. Lessons learned here can also be transferred to other materials,” said Roßnagel. “For material physics, it is to some extent what the Drosophila fly is for biology.”

Layered crystals from Kiel: international leader in nanotech research
Tantalum disulphide is a kind of “crystal sandwich”: between two layers of sulphur atoms lies a layer of metallic tantalum. Together, they are just half a nanometre thick. Numerous three-layer sandwiches stacked on top of each other ultimately form the layered crystal. Roßnagel’s working group has more than 35 years of combined experience in the production and analysis of the coveted test material. The high-purity chemical precursors tantalum and sulphur are inserted into a quartz ampoule, the ends of which are heated to varying degrees in a special oven. In six to eight weeks, the multi-layered crystals grow in the ampoule.

In recent years, the tantalum disulphide crystals produced in Kiel have become a trademark in international nanotech research. Due to their quality, research groups from around the world request crystals from Kiel for their experiments. By discussing their results with the experts from the CAU, numerous research collaborations and joint publications have arisen about the material from Kiel. Recently, three studies appeared in a short period of time. They all deal with the question of how electrons and atoms behave in tantalum disulphide, and thus affect the functioning of the material.

New studies show previously-unknown movement phenomena at the atomic level
In cooperation with the University of Aarhus, the scientists investigated how electrons move within a tantalum disulphide crystal. In spectroscopy experiments at low temperatures, they determined that their mobility between the layers was significantly higher than along them. “The fact that the individual layers to some extent ‘talk to each other’, and that current flows vertically between the layers more easily, surprised us,” said the solid state and surface physicist Roßnagel about the results.

The Kiel team investigated why the electrons are so immovable within a layer of tantalum disulphide at low temperatures, together with colleagues from the Universities of Duisburg-Essen and Hamburg, and the University of Fribourg in Switzerland. From the outside, they placed free electrons on a layer of tantalum disulphide. Since electrons are already bound to all of the atoms, and negatively-charged electrons repel each other electrically, the extra electrons “hopped” from atom to atom. In their experiments, the researchers were able to measure how long an electron requires to do this. “We were able to explicitly demonstrate for the first time why the current flow is impeded at this point: the electrons are essentially getting in their own way.”

Thereafter, in a study with the University of Göttingen, the scientists investigated the process of ultra-fast structural transformations in tantalum disulphide. Thanks to a new method developed in Göttingen, the atomic rearrangement could be recorded in super slow-motion: the atoms which were abruptly forced from their regular arrangement only gradually found their position in the new structure, initially in isolated rearranged areas, which slowly grew larger and merged.

Ultra-fast transistors conceivable in the long term
Although tantalum disulphide is still a material from basic research, in principle it makes new electronic components possible. “Ultimately, tantalum disulphide is a switch. One day, it could be used to make an ultra-fast transistor,” said Roßnagel. In future, he wants to observe the processes in tantalum disulphide in real-time, using the high-performance X-ray laser European XFEL. “With each new measurement method, we make new discoveries in the material. Here, we will effectively watch the atoms together with the electrons live at work.” As the spokesperson of an international consortium, Roßnagel is currently preparing an experiment with ultra-fast spectroscopy at XFEL located in North Germany . The first experiments are planned to run in 2019. They are intended to contribute to a decisive advance in our understanding of the nano-cosmos.

Details, which are only a millionth of a millimetre in size: this is what the priority research area “Kiel Nano, Surface and Interface Science – KiNSIS” at Kiel University has been working on. In the nano-cosmos, different laws prevail than in the macroscopic world - those of quantum physics. Through intensive, interdisciplinary cooperation between physics, chemistry, engineering and life sciences, the priority research area aims to understand the systems in this dimension and to implement the findings in an application-oriented manner. Molecular machines, innovative sensors, bionic materials, quantum computers, advanced therapies and much more could be the result.”