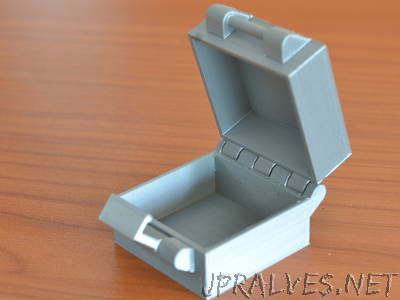 “This is my second try at a one piece hinged box with latch. This latch is a little easier to operate than my box design I derived it from. For more information about this box, see the box it was derived from. I like this latch design a lot. It locks the box closed very nicely and this version I printed as a test, has very nice tolerance at the hinge and at the latch. Now that the testing is over, I can design my real project. UPDATE: v2 files now how a more tolerant latch. I realized that the tolerance for the latch was mistakenly coded to be half the tolerance of the hinge, since the hinge has slop tolerance for both the mail and female side. The latch should break free much easier on this version. Thanks everyone who printed it out or at least tried.”